Look what I just received! I feel like I have just been published….

How serendipitous. I am on a plane to NYC in 5 hours! Guess I am going to Brooklyn.

Thanks for sending in your project for The Sketchbook Project: 2012! We just wanted to let you know that your project has now been cataloged into the Brooklyn Art Library! It can be found on the shelves with a call number of 148.8-6.
Please stay tuned for more details about the project.

Have a great week friends!

sealed and delivered. Just in the nick of time!

My sketchbook is on its way to the  Brooklyn Art Library. If I can’t be in NYC, at least a little part of me can.

So, the good news..  there is still plenty of time to sign up for this years Sketchbook Project. I would highly suggest it. A very fun and inspiring community to be a part of.

This year for the first time you also have the option of joining “The Limited Edition” group! Not only does your sketchbook 2012 get to live in NYC at the Brooklyn Art Library, but it will also be published!

I want to be published!

Every contributor to the Sketchbook Project Limited Edition Vol. 1 will be included in a series of art books documenting the project. Together, the series will provide insight into the imagination and process of each artist participating in the project. Bound by the Brooklyn Art Library Press and hand-finished in our Brooklyn workshop, the book series will be published in the fall of 2012.

The bad news…last I looked there were only 700 spots left. That may sound like a lot, but considering they accept 5000, your time may be running out.

Ok here is a little peek into my sketchbook. I chose the theme ~ along the line. I kept mine in black and white so I could pick it up anytime, anywhere and work on it. However, how creative you want to get with it is entirely up to you. The only restriction is size – it has to remain within the covers of the actual sketchbook. 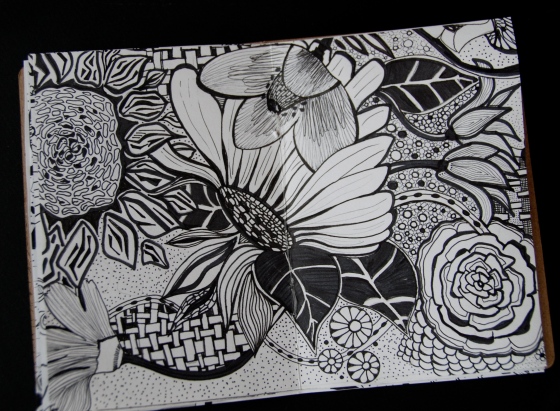 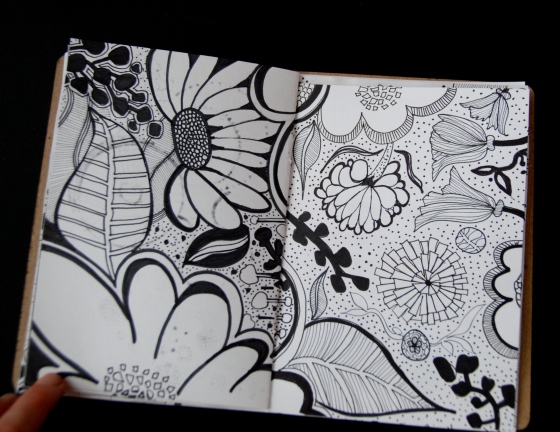 You are lucky I didn’t show you it in its entirety!

Actually I only had a few more pages.

After discovering that the paper is a little flimsy, I tore mine apart and added my own paper. I may have missed a few pages…I am hoping no one counts.

All in all pretty pleased. I made mistakes. I made discoveries. I enjoyed the process.

I forgot to sign it…nothing…not even my web address. Still shaking my head…

I am having a bit of a hard time parting with it, but I will see it again on its world tour!
Dates for the World Tour are here.
AND trust me, I will be using it as an excuse to get to NYC very soon!

I love getting mail. I knew it was coming, but it was exciting to find it there none the less.

page after page of endless possibility

My little sketchbook for the Sketchbook Project 2012.

Thousands participate. Writing, drawing, painting, collage, altering…anything goes!
Anyone – from anywhere in the world – can be a part of the project.

After the tour, all sketchbooks are entered into the permanent collection of The Brooklyn Art Library, where they will be barcoded and available for the public to view.

What sparked my interest originally for this new project was my love for the big, blank book and the endless possibility involved. Then, I discovered that the tour was actually passing through my neck of the woods. (We will keep that to ourselves though as I am hoping to get a trip to NYC out of my participation…I am sure it said mandatory somewhere in the guidelines…) Then there were some heart-felt moments as I thought of the community that would be created by this project. Drawing and writing were also high on my list.

But, after careful consideration of all my motives, I think the one that stood out the most…the clincher…was my sketchbook, barcoded, and housed in the Brooklyn Art library.

Now that is pretty cool!

To give you an idea of what others are doing with their sketchbooks, take a look here.

I think this project is so cool that I am going to be the first to “like” this post!

Check out all you have missed!